enhancement of cultural vitality and community spaces and aligns with the Imagine Kelowna goal of an engaging arts and culture scene. This plan strives for a balance between being too vague in its priorities, therefore accomplishing little, and being too prescriptive, which would limit the ability to take advantage of new opportunities that may arise.

Most importantly, this plan sets a course for the entire creative sector to provide accessible, diverse and inclusive experiences, that uses resources effectively, leverages opportunities, is innovative and forward thinking and highlights the value of partnerships and cooperation.

The next phase of cultural development in Kelowna will bring about new programs, relationships, commitments and support.

We all have a role to play, what's yours? 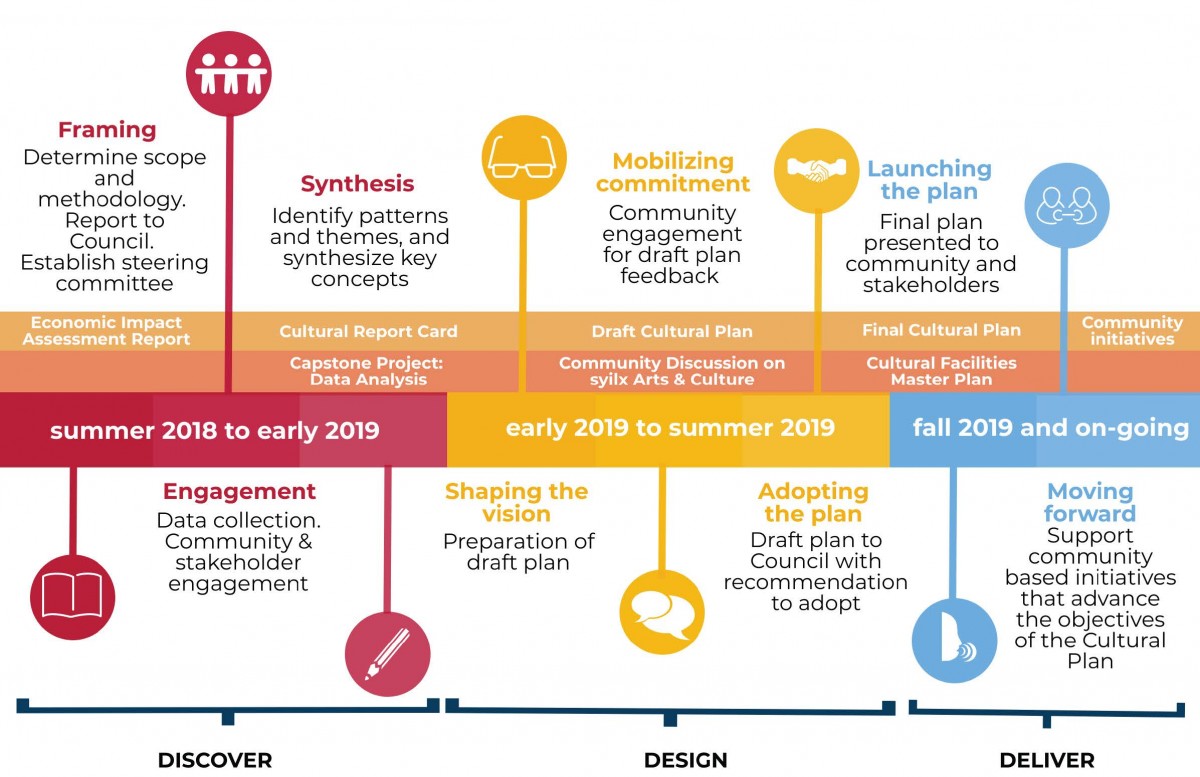 We sought your feedback on how the community defines and experiences culture. Questions focused on defining culture, what parts of culture are going well in Kelowna, where people participate in culture and any room for improvements. Survey responses helped us develop an understanding of what culture means to the community, what the community enjoys and what the community would like to see more of.

We sought community input on the 2012-2017 Cultural Plan's goals, how they are prioritized, and if anything needed to be added. We also collected feedback on strategies on how to work towards the goals - what can residents, organizations, businesses or what we can do.

Host Your Own Engagement Grants - Completed

We invited individuals, organizations, businesses and collectives of diverse histories and practices to play an active part in the process of shaping the 2020-2025 Cultural Plan by “Hosting Your Own Engagement” event with their staff, board, volunteers, members or the general public.

A total of 13 conversations received grants but many more conversations occurred. The conversations were held in many different forms and drilled down into a variety of important topics such as live music, literary arts and integrating culture with well-being.

Information collected from these events will be used in the development of the goals and strategies.

Thank you to all of our "Host Your Own Engagement" hosts!

A draft of the Cultural Plan was completed and we brought it to the community for feedback. Items for feedback included the vision, guiding principles, key themes, goals and strategies. Feedback was collected in-person at a variety of events around the community, and an online survey and discussion platform.

Information collected from these events will be used to solidify the major components of the Cultural Plan and assist in the preparation of a final draft. In September, we will seek Council's endorsement of the 2020-2025 Cultural Plan.

Chat with the community and let us know what role you are going to play in the plan by participating in the online discussion forum.

We invite individuals, organizations, businesses and collectives of diverse histories and practices to play an active part in the process of sharing and implementing the 2020-2025 Cultural Plan by hosting a “Share the Plan” event with your staff, board, volunteers, members, friends or the general public. A “Share the Plan” Event Grant is intended to support you to host a conversation about the 2020-2025 Cultural Plan and report your thoughts and ideas back to us.

For more information about the program, check out the Share the Plan grant program guidelines.

Congratulations to our Share the Plan event host grantees! Get involved in their events:

Need help running your event? We have a handy Share the Plan Event Toolkit for you! Contact culture@kelowna.ca for more information on the tools we can offer.

With support from the University of British Columbia Okanagan, we used data analytics and machine learning to identify trends, patterns and insights into citizen's engagements with culture in Kelowna from an unbiased lens. These outcomes will help to develop the 2020-2025 Cultural Plan.

In support of the development of the 2020-2025 Cultural Plan, a consultant was hired to complete an economic impact study of the creative sector of Kelowna. The assessment includes analysis of available statistical data, a confidential online survey, and information from public sources to generate estimates of employment, revenue, and income.

Key highlights from the report include:

Information in this report will support the development and implementation of the 2020-2025 Cultural Plan.

The Cultural Plan is an opportunity to increase the visual presence of syilx creativity in our community. Therefore, as part of the process of engagement for the Cultural Plan, we initiated a conversation with Carrie Terbasket of Stands Above Consulting who supported us to begin this journey of open dialogue and discussion with the syilx arts and culture community.

The purpose was to receive guidance toward establishing meaningful and deliberate syilx/ Okanagan inclusion within the 2020-2025 Cultural Plan through applicable background information and recommendations for consideration. The scope of work was limited to recommendations specific to the advancement of arts, culture and heritage by the creative sector of Kelowna (inclusive of the City of Kelowna as an entity).

It is acknowledged that this work is only a starting point to the commitment and long-term organic process by the arts and culture sector toward reconciliation. The report is only intended as input and the recommendations are considered along with all feedback received from the community. The importance of partnership with our First Nations is a worthwhile and a long-term commitment to relationship building.

Along with the Capstone Project Data Analysis Report, Creative Sector Economic Impact Assessment, Weaving Our Collective Threads and the Cultural Report Card, one last supplementary report is still on the way:

It should be noted that although this report is not finalized, all data collected was used to inform the 2020-2025 Cultural Plan.

Cultural development in Kelowna began in the early 1970's when a committee formed to study the possibilities of developing a 'Cultural Arts Centre' in Kelowna. In 1989, a Mayor's Task Force was established to create our first cultural policy. Updated most recently in 2010, this policy gives form, support and provides direction for the cultural development in the city.

Over the past 20 years, significant progress has been made to integrate arts and culture into overall community planning and deliver cultural services to residents and visitors.  Early work led to the establishment of a number of cultural facilities, the Cultural District, a granting process, and the establishment of a Cultural Services branch in 2001.

As the fourth pillar of sustainability, we take culture seriously and strive to weave it into all aspects of civic planning and life in Kelowna. To achieve this, Kelowna's first Cultural Plan (2012-2017) was launched in 2012 to encourage and integrate local culture within all neighbourhoods of Kelowna. Since then, significant progress has been made in implementing 2012-2017 Cultural Plan goals and strategies. Many organizations continue to thrive, and new organizations and venues have emerged. Major initiatives such as the Bernard Avenue revitalization, the Civic Block Plan, the relocation of the RCMP, completion of new parkades and the opening of the Okanagan Centre for Innovation have had an impact on the landscape of the Cultural District.

Affordability of spaces for living, working and creating is an issue for many artists. In addition, key buildings in the City's inventory of cultural infrastructure such as the Kelowna Community Theatre and the Okanagan Heritage Museum continue to age, with mounting structural deficits, as new buildings go up around them.

While we realize that as an organization we do not create culture, our role is to facilitate and promote culture by providing vision, goals and adopting strong policies. An update to the Cultural Plan is intended to respond to changes and challenges and set a direction for the next five years from 2020-2025.