KCT: A community theatre from the ground up

Home > Our community > Community stories > KCT: A community theatre from the ground up

On November 10, 1960, readers of the Daily Courier opened their morning papers to some exciting news: “City Now Has a Good Chance to Obtain an Auditorium,” announced an article published by the paper’s editors.

This was big news in 1960. Back then, Kelowna was a city of just under 30,000 people; a sleepy lake town surrounded by lush orchards, tucked away in BC’s interior, several hours by car from the coastal hub of Vancouver. Prior to 1960, those hoping to mount a play, put on a concert, or host a community gathering relied, for the most part, on the old Empress Theatre. Formerly located on the 200 block of Bernard Avenue, the Empress opened in the fall of 1919 as a purpose-built movie hall, but soon became a de facto event space for the growing city.

By the end of the 1950s, though, the Empress had run its course, and was converted into office space, playing host for a time to the Kelowna Capital News. This left Kelowna, in the midst of a population boom spurred on by a post-WWII veteran resettlement program, without an appropriate venue for cultural events and community gatherings. The problem was obvious to the editors of the Daily Courier: “The realistic fact is that Kelowna has no place to hold a large meeting, to stage a concert or a play or any other of the cultural activities which draws an audience.”

This also spelled trouble for Kelowna’s burgeoning cultural community, which at the time included groups like the Little Theatre, Kelowna Productions (known for their “fine musicals”), the Civic Music Organization, the UBC Players, and the Kelowna Film Festival. With the Empress gone, opined the Daily Courier editors, our young city was at risk of not just a “civic loss,” but a “cultural loss,” as well.

It didn’t take long, though, for a group of motivated Kelowna residents to step up and transform this moment of potential crisis into an exciting new opportunity. In fact, by the time the Daily Courier editorial appeared in November, a committee of residents had already been working for some eight months to develop a plan and raise funds for a dedicated, permanent home for the performing arts in Kelowna.

While total projected construction costs for the project were about $80,000, the citizen committee set out to raise $35,000. An additional $25,000 was pledged by Council, with the remainder of the cash coming from the provincial and federal governments, via the Winter Municipal Works Program. By November 23, the newly minted Kelowna Community Theatre and Auditorium Committee had raised nearly $13,000 of the required funds.

This was no small feat. It took commitment and sacrifice not only from the team of 30 canvassers tasked with pounding the pavement in pursuit of donors, but from local arts groups. Kelowna Little Theatre donated its entire $2,000 budget to the project, along with lighting it had installed at the Empress. The Little Theatre kicked in funds to cover 250 of the new theatre’s seats, while R.J. and Bill Bennet, along with Famous Players (the storied film exhibitor that in the 1930s purchased the Empress), pitched in for another 400 seats.

This same spirit of community bled over from the fundraising drive into the committee's vision for the theatre itself. Speaking to the Daily Courier, Dave Chapman, the chair of the committee, made it clear that the proposed venue was to be first and foremost a community space. “There was still a feeling abroad,” wrote the Courier, “that the theatre would be a sort of private institution.” Chapman assured the paper, “This is far from the truth...The new building will be used as a community theatre and auditorium by anyone who wants to use it. It won’t be run by any private group, but by the city itself for all the residents of the city.”

Less than two years later, the committee's dedication would bear fruit. On September 13, 1962, Kelowna Community Theatre opened to great fanfare on a City-owned parcel of land at the corner of Doyle Avenue and Water Street. At the time of opening, it was the only full-size, purpose-built performing arts venue between Vancouver and Calgary: a remarkable, forward-thinking achievement for a town of Kelowna’s size.

It’s only fitting, then, that the theatre’s launch was a spectacular affair. Following a ribbon-cutting ceremony presided over by Mayor R.F. Parkinson, patrons were treated to a performance by Canadian opera singer Teresa Stratas. Born in Oshawa, Ontario in 1938, Stratas in 1959 hit it big when she landed the role of Poussette in the Metropolitan Opera’s production of Jules Massenet’s Manon. Of Stratas’ appearance at KCT, the Daily Courier enthused, “It is not often that residents of a city this size may hear a concert of this caliber without travelling to a larger centre….Thursday will be a gala evening in Kelowna—a first that will be long remembered.” And the party didn’t stop at the theatre doors. Residents across the city marked the occasion by hosting evening soirees and cocktail parties for friends, family. and even some out-of-town visitors. A true community affair!

As we mark our 60th anniversary here at KCT, it’s wonderful to reflect on the pivotal role local residents played in bringing this facility to life. It is a powerful reminder of why we’re called Kelowna Community Theatre in the first place. We are the product of a group of committed citizens working together with great foresight to create a permanent home for live arts and culture in our community. This fall, we invite you all to join us as we mark our diamond anniversary and continue to honour the hard work of those who put the ‘community’ In Kelowna Community Theatre all those years ago.

Learn more about our anniversary celebrations, including our free open house and our special presentation of the Gary Cable Project with the Okanagan Symphony Orchestra, at theatre.kelowna.ca

Caroline Ivey is the Manager of Kelowna Community Theatre. She is passionate about serving the community through the performing arts, and works with many of our local arts and culture organizations to bring unforgettable experiences to local theatregoers. 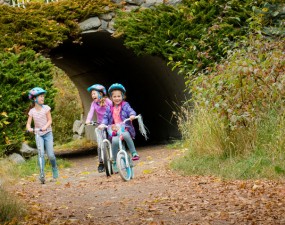 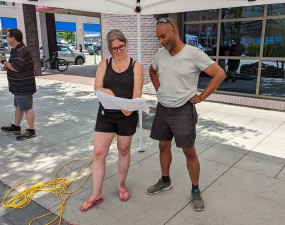 It takes a village to make a street: How collaboration brings Bernard to life each summer 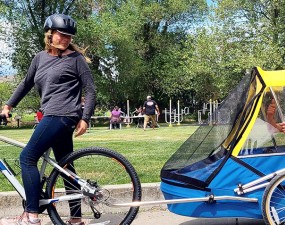