The western pine beetle and mountain pine beetle are native beetles that attacks pines in the Kelowna area and throughout western North America. Since 2003, the pine beetle populations had risen significantly in the Okanagan Valley causing considerable mortality to primarily ponderosa pine trees until only recently. Ponderosa pine and some exotic pine trees were attacked in the city and will continue to be attacked as the pine beetle is a native pest to our regions. However, we have seen a significant decline in the activity over the past few years.

Control efforts can have minimal effect on the populations during an infestation of this size. However, we have managed to minimize some losses to some significant pine trees in our parks through our efforts. The increased pine beetle populations in the surrounding forests spill over into our urban areas, similar to the previous pattern seen in Kamloops, Prince George and other B.C. cities and towns.

How do I know if I have pine beetles?

Look for these signs:

If these signs are evident, the tree should be removed and properly disposed of before beetles are allowed to re-emerge.

Infested trees must be treated to destroy beetle brood (e.g. debarked, burned, chipped or thoroughly buried).
DO NOT store infested wood or use it as firewood unless it has been treated. 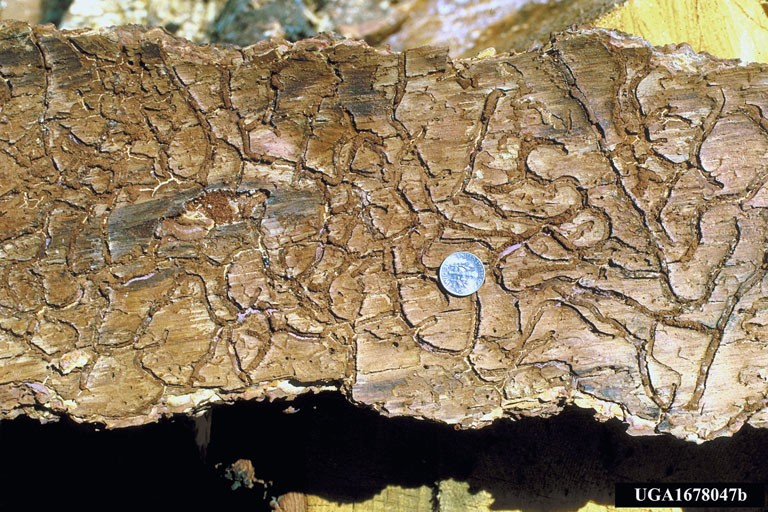 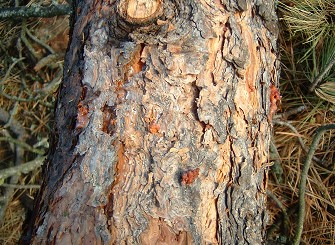 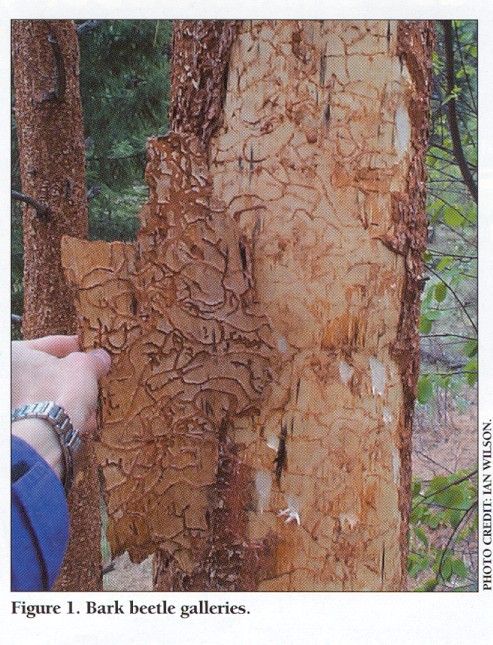 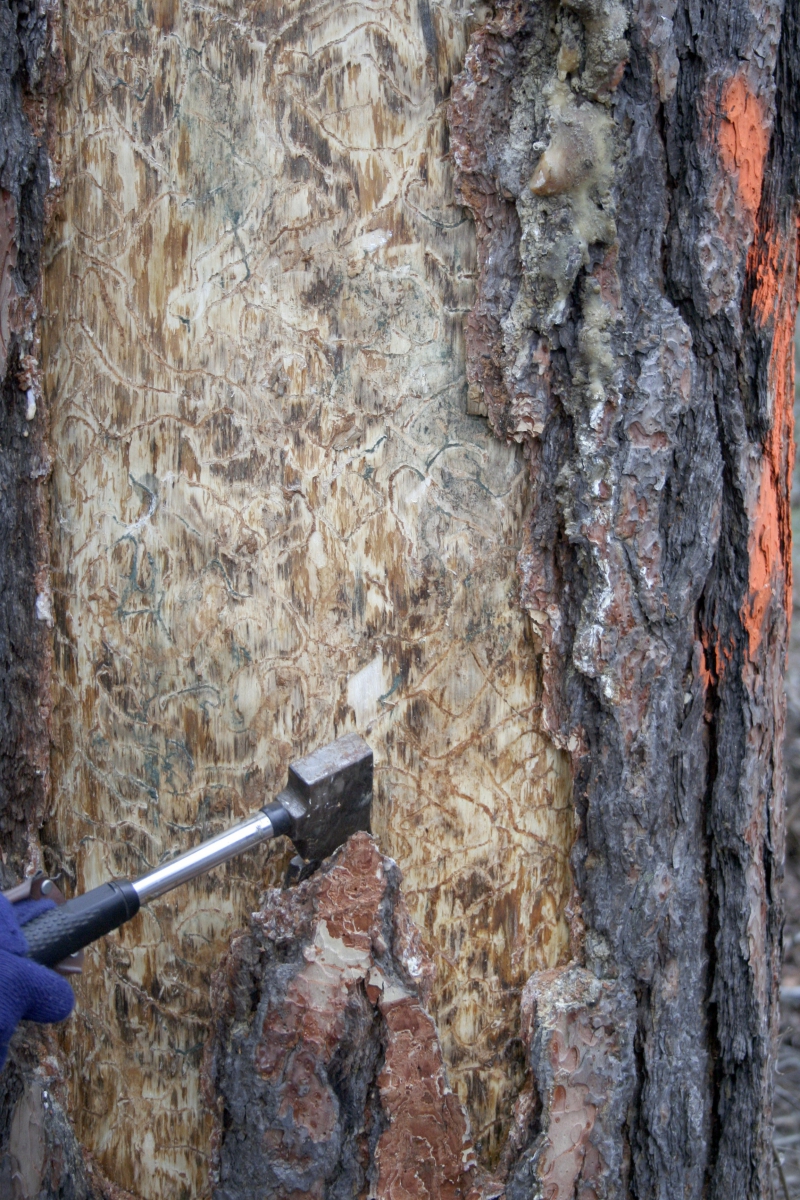 There are no guaranteed solutions to prevent pine beetle attack, but the following are some options that have shown some promise in our parks.

Remove and dispose of infested trees

Existing infested trees need to be identified and properly disposed of prior to considering any prevention of future pine beetle problems. Do not use the infested trees for firewood and minimize the transport of the infested material.  The landfill will accept the infested wood and they will grind the material which exposes the beetle larvae to the elements and which will kill them.

Trees that are drought-stressed, topped, poorly pruned, injured, root damaged or roots buried in fill will be more susceptible to beetle attack.  Avoid pruning live branches during the spring or summer, as beetles may be attracted to pruning wounds.  Water your trees in the summer if possible, but don’t over-water.  Be very careful with fertilizers; application of nitrogen fertilizers may actually make the tree more susceptible to attack.

If you have a large stand of trees, consider thinning them out, preferably during the winter so that beetles are not attracted to freshly cut stumps.  Research suggests that thinning can help prevent beetle attack in forested stands.  As a minimum guideline, thin trees so that the crowns do not touch (~150-300 stems per hectare).  This also helps reduce wildfire hazard.

Monitor your trees on a regular basis

Hire a professional to help monitor your trees periodically or get some training to ensure that you know what to look for yourself. Western pine beetle can attack trees anytime between April – October, while mountain pine beetle generally attacks from late June to October.  If you find early signs of attack, hire a professional to ensure that infested trees are disposed of promptly and properly.

Verbenone is an insect pheromone and naturally occurring repellent or anti-aggregate that is produced by the beetles to indicate when a tree is ‘fully occupied’ by beetles. Pine beetles aggregate in large numbers on a host pine tree in order to successfully reproduce.  Once the number of beetles meets its maximum occupancy of a single host tree the pheromone, Verbenone is released by the beetle.  Verbenone pouches can be stapled to a tree prior to the beetles emerging from overwinter under the bark in the spring.

The verbenone pouches are registered for use against pine beetle.  However, recent research suggests that verbenone is not as effective when beetle populations are high.  This product is available locally at some hardware and garden centres.

Sevin (carbaryl) is registered for mountain pine beetle control.  Spraying a mature pine tree is potentially hazardous and subject to a number of environmental regulations, and should only be attempted by a pest management professional.  Other injectable pesticides such as "ace caps" are not registered for this purpose and research has shown that they do not work.

The City has wrapped high value trees in areas such as Waterfront Park and Rutland Lions Parks to try and prevent further pine beetle related tree mortality. The material is fibreglass insect screen, the same material used in screen doors.  This material is relatively inexpensive and is available in large rolls.

Start by pruning the lower branches.  Wrapping the trees vertically with only a single seam which is sealed with a silicone caulking compound.  The screening is stapled in place, with some extra room for tree growth.

This technique is more environmentally friendly than pesticides and may also offer several years of protection whereas pesticides would need to be re-applied.  However, keep in mind that this technique is still experimental and will not protect the tops of trees.